(I’m not so sure about this one…Held onto it a few months. Then figured what the hell. So here it is….)

I’ve just been reading one sad article after another about Israel and Gaza and Palestine and murders and retaliation and things blowing up.  And I’m thinking again how none of this would be happening if it hadn’t been for Gavrilo Princip and his little gun. It was a warm summer day in Sarajevo a century ago. He came out of nowhere, fired twice, killed the heir to the Hapsburg Empire and his loving wife died too. They died in each others arms. 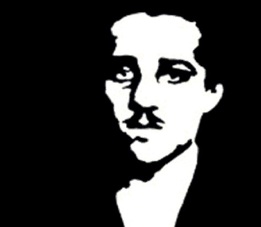 The police grabbed Princip. He was tried, found guilty and sentenced to the maximum sentence of twenty years. There was no death penalty in Austria-Hungary for those under twenty one. Not even for regicide. He died of tuberculosis in his cell within a couple years. No matter, he was no longer any importance, none whatsoever. He never did get to see how his war came out. He just rotted his life away (literally, his tubercular bones were disintegrating) completely forgotten as the world came down all around him. He had some regrets. There are interview transcripts. He said if he’d known all this would happen he never would have shot the Archduke. Never at all. He would have stayed home deep in books–he was quite the reader–and just let the royal procession pass by. He had always wanted to be a poet anyway. A great Serbian poet.

Oh, the might have beens. They careened off each other all through that July of 1914, those might have beens. What if the Emperor had done this instead. What if the Kaiser hadn’t said this. What if the Czar had done something else. What if after what if after what if, there are entire libraries full of these what ifs. But none of them happened and Gavrilo Princip’s two little shots did their worst, like a single snowball that sets off an avalanche that sets off more avalanches and then even more avalanches and everything falls down and old mountains are leveled and new ones piled up and countries and empires and peoples disappear and entire civilizations are left twisted smoking wrecks.

And still the reverberations continue. They are happening in Gaza as I write. Everything that happens between Israel and the Palestinians today can be traced back to Gavrilo Princip and his little gun. His two shots set off a world war that set off a world war that nearly set off a third world war. The reverberations would have ended  with that. Done. But that war didn’t happen and so the reverberations continue, right down to the violence in Gaza now. You can toss in the Ukraine. Syria. Iraq. All this from two little shots. Think about it: if Gavrilo Princip hadn’t been standing at exactly the right spot when the Archduke’s driver made that wrong turn–Sarajevo’s twisting streets could confuse anybody–then we wouldn’t even know who Gavrilo ever was. Unless he became a great poet or thinker. He certainly had a head on his shoulders. You can see that in the essays he dashed off. Indeed, he’s quite the national hero in Serbia. There’s a statue of him. A building  named after him. Even a gun waving celebrity impersonator. But besides perhaps some Serbian academics, the rest of the world wouldn’t even know he’d Gavrilo Princip ever existed. An obscure poet at best. But to be honest, we wouldn’t know anything about anything we know today, because without Gavrilo’s little gun, everything would be different because nothing would have ended as it did. We might still even have empires today–real ones, with real emperors–and never had certainly never heard of Lenin’s Bolshevism, and Hitler would have been some little failure of an artist somewhere and Naziism never born. There certainly would have never been a Final Solution. The deranged thinking that brought that about simply would not have been even conceivable without the horrors of the First World War. And that war would not have happened. Not if Gavrilo Princip had never pulled the trigger. Which means we would not have a State of Israel, with its army and air force and Uzis on the beach. Or Arab states to war with it. They were all Ottoman then. Even Palestine itself was an Ottoman province. There’d be no war in Gaza right now. There’d be six million people speaking Yiddish all over Europe. ISIS would not exist. Nor the Taliban or Al Qaeda.

You would probably not be reading this on the internet right now. There would be no internet, not yet. It was conceived and developed as a means for government and military to communicate after a nuclear war, which would not have been a threat as there would have been no nuclear weapons because there would have been no WW2 or even the industry capable of inventing one. Computers would probably be behind where they are today, as early research and development was primarily for use by British codebreakers in WW2. The First World War that had accelerated technology by quantum leaps…science and engineering and technology and manufacturing were modernized at an astonishing rate, making a early computer development possible, even necessary. The world of 1918 we recognize, that of 1914 would seem utterly foreign. The arms race between the world wars kept up the pace of change. The plywood and baling wire biplanes of 1914 led to the concept of B-29s and jet aircraft before WW2 even began. Werner von Braun was already developing rockets. The Luftwaffe designed a flying wing, the British used computers, the Russians designed tanks whose sleek design still looks almost 21st century, and the Americans built the atomic bomb. And then those computers–huge things, ridiculous– that were the beginnings of our own world. All that driven by war and rumors of wars. They flew zeppelins in WW1. Massed cavalry with lances and feathered hats. Dreamed old dreams. Posed like Napoleon in bright red breaches. By 1918 all eyes were on the future, and that future was another world war. WW2 created us, our world. The imagination of Jules Verne turned into reality. The transformation came with astonishing speed. You can see that in movies. The thirties are quaint. It’s hard to imagine living then. The forties are modern. So modern we can imagine ourselves there. Even the living rooms look like ours. Only the internet is missing.  Now think back to 1913. It was downright primitive. You wonder what people possibly did. Imagine it–a world where change came slowly, incrementally, and you feared too much of anything new. Now we dream of the future. You want to be there. It’s a constant rush forward into new technological realms. WW1 created that kind of thinking. And Gavrilo Princip created WW1.

You’d be hard pressed to find one other individual who single handedly changed human history, and did so in just a matter of seconds. Two quick squeezes on the trigger, almost without thinking. His targets were dead within a minute. He was dead within three years. The world he knew was gone within four. And that was just the beginning. All of the world’s empires were gone within fifty years. Half the globe was swept by communism. The US held sway over the rest. None of this would have happened the way it happened had without Gavrilo Princip. He managed to set that off all by himself, just he and his pistol. And incredibly enough, we are still feeling the effects of those shots today. You wonder if those two shots will ever stop reverberating. I told myself it must have ended when they Berlin Wall came down. That at last we are free of Gavrilo Princip. My assumption seems so naïve today. Look at the headlines. Israel, the Ukraine, Iraq…all have roots that go back to the First World War. Which goes back to that murderous little man and his ridiculous little gun. Without him everything would be completely different. It wouldn’t be the same as it was in 1914. But that’s not the point. We’re not talking alternative histories here. We’re talking the chain of cause and effect. He was the guy who stepped on the butterfly.

At some point, far, far, far in the future, they might look back and recognize Gavrilo Princip as one of the most important human beings ever. Sometimes it’s not what you do that is important, but what you make others do. And he has us still doing it, a hundred years later. Gavrilo Princip flicked his trigger finger, twice, and half the world came crashing down. Eventually nearly all the world. It never has gotten back up. Not completely.

Nothing is ever at an end.  No work ever completes itself just as no life ever completes itself.  Rather we are but steps leading both up and down simultaneously and to those who use us for our chosen purposes, they too may go up or down or sideways, but the destination is not clear, and usually is not existent.

Why then exist if not for some perfect end?  Why because there is no perfect end all routes but possibilities are and no two lives can ever unfold exactly the same way again. I consider that better than a satisfying and perfect end for some, for I would rather the whole world exist imperfectly than end perfectly just for some.

My latest writing at: Brick Wahl

I remember in 1980 when the inconceivable happened and Reagan was elected we all assumed that made WW3 inevitable so what was the point? Any career planning went out the window and we did whatever we wanted. It seemed utterly pointless to think more than a couple years ahead when there were 55,000 H bombs […]

Sprained the fuck out of my ankle last week and since then I’ve had to buy three new outfits to match the shifting hues. The greenish yellow is challenging, especially getting a three piece suit that also works with yellowish green. It’s a shame that they don’t sell the argyle socks with matching jacket and […]

My latest writing at: Brick's Picks

Danny Thomas’s first spit take. It’s there at the end of the bit. Though he didn’t invent the art form, Danny Thomas—Marlo’s dad—was the Jimi Hendrix of spit takes, and even if we kids didn’t get the jokes we loved his spit takes, because he was Danny Thomas, who was still on TV weekly and […]

Found this in my drafts, completely forgotten. I only found it again when one of these bits–Walking About–wound up on a tee shirt in Australia. Seems I had once spent a late evening on YouTube digging up old tunes from my past life and writing about them. They’re not for the jazzbos, most of ’em, they’re […]

My latest writing at: Brick's Politics

In case you were wondering how Donald Trump became president.

Hoover flags, they called empty pockets in 1931, and they became emblematic of Herbert Hoover’s abject failure in dealing with the Great Depression. I suspect homemade face masks are becoming Trump’s Hoover Flags.

My latest writing at: Brick's Science

Climate change in our fish tank

You wouldn’t think you could have a climate change caused ecological disaster in our fish tank. But last week’s heat wave was so extreme it overheated the water, killing a few of the fish as well as unseen zillions of microscopic algae. Days later they clogged the filter in a rank slimy dark mass and […]