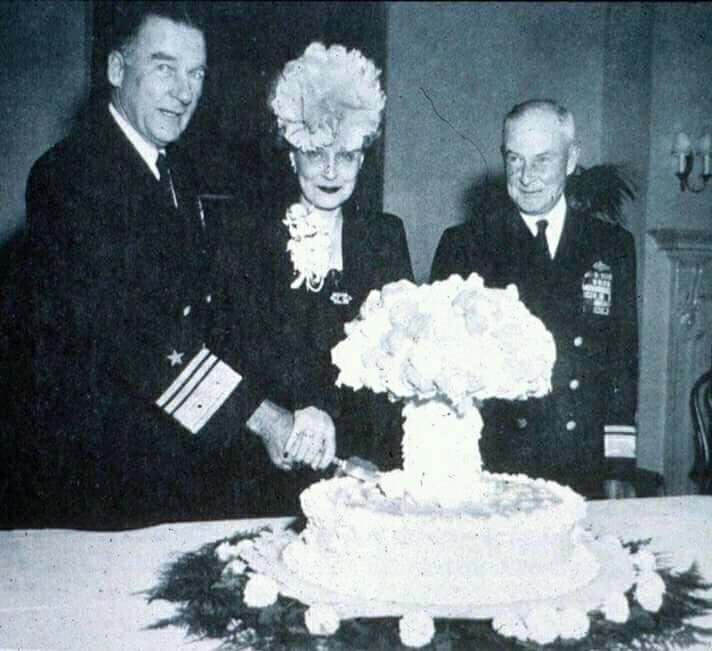 An atom bomb cake? Is this the single weirdest tackiest photo of 1946? Hiroshima and Nagasaki had barely stopped sizzling. The victims were still dying. Sheesh.

Then again, from the perspective of the US military the bombs saved a couple hundred thousand US and several million Japanese lives that would otherwise have been lost in the invasion of Japan. Well, the second bomb saved them. Hiroshima was obliterated for no reason at all because it did not shake the Emperor’s intention to have his entire civilization to go up in a blaze of fire and suicide. That was the plan. The emperor’s subjects certainly had done so thus far. Japanese soldiers had fought to the death and Japanese civilians had committed mass suicide in every action against Americans in 1944-45, and unlike Germany, the resistance and fanaticism increased and not decreased as the US closed in on the homeland. Japanese flyers joined in, dying in mass kamikaze attacks. The last of the Japanese fleet was sunk in a suicide sortie, the world’s biggest battleship going down with nearly all hands, a 70,000 ton kamikaze. Now Japan itself was on the verge of a final act of national nihilism that Hitler, deep in his bunker, could only have dreamed about.

Then we obliterated Nagasaki and the Emperor woke up to reality. Instantly the war was over. Several hundred thousand American soldiers went home and there was a glut of unused coffins, whole warehouses full. In Japan, the cities smouldered and two radiated but the countryside was as untouched by war as America’s. Weird the fortunes of war.

So perhaps this mushroom cloud cake that strikes me as incredibly callous now was really just a tacky sigh of relief. As memories of the prospects of invading Japan faded (along with memories of Japan’s genocidal war crimes) people became increasingly aware of what happened to the poor people in Hiroshima and Nagasaki. We remember what actually happened instead of what might have happened. Decades living under the threat of world wide nuclear annihilation certainly altered perspectives. But it took us a while to get to this state of consciousness. Indeed, there was a time there in the late 1940’s when people looked on the atomic bomb as some sort of war ending peace assuring wonder weapon. There was even a weird stretch there where people seemed enamoured of mushroom clouds, in cakes, in Vegas, in song. “I’ve been to Nagasaki,” Wanda Jackson sang, “Hiroshima too/What I did to them/I can do to you!”

It’s like the whole damn planet had PTSD after the War. Maybe everyone was nuts. And I wonder if that mushroom cloud cake was chocolate. I’d eat a piece of chocolate atomic bomb cake. Or a piece of chocolate global warming cake or chocolate invariably fatal pandemic cake or any kind of post apocalyptic chocolate cake. It’s not like it’s the end of the world.

My latest writing at: Brick Wahl

I’ve put hours and hours into cleaning up the heatwave caused eco disaster in the fish tank and it’s beginning to look gorgeous again. I was sitting on the couch watching it like it was television when the rumbling began. As it grew in intensity I just got mad, and madder, and finally yelled Don’t […]

Now they tell me

So apparently epilepsy and Benadryl don’t mix. Especially combined with lots of strong coffee, little sleep and a nasty sinus infection. Funny what you learn way past the age of being old enough to know better. Better now. A little more memory damage, more leery of writing than ever. Next time I pick an easier […]

My latest writing at: Brick's Picks

Found this in my drafts, completely forgotten. I only found it again when one of these bits–Walking About–wound up on a tee shirt in Australia. Seems I had once spent a late evening on YouTube digging up old tunes from my past life and writing about them. They’re not for the jazzbos, most of ’em, they’re […]

Staying in tonight, we’re going to see Chuck Manning at the York tomorrow. Been listening to ancient radio comedies all week. Amazing how weird and conceptual and hysterically funny this stuff was, TV comedy has rarely come close, and never gotten beyond it. The mind’s eye can visualize so much more than our meager real […]

My latest writing at: Brick's Politics

Hoover flags, they called empty pockets in 1931, and they became emblematic of Herbert Hoover’s abject failure in dealing with the Great Depression. I suspect homemade face masks are becoming Trump’s Hoover Flags.

I admit it, I voted for Mike Bloomberg. I think it was the last one hundred mailings that won me over. Not that I read any of them. But there were so many it just had to be presidential. Liz Warren only sent a few, which I read. She had my vote for the first […]

My latest writing at: Brick's Science

Climate change in our fish tank

You wouldn’t think you could have a climate change caused ecological disaster in our fish tank. But last week’s heat wave was so extreme it overheated the water, killing a few of the fish as well as unseen zillions of microscopic algae. Days later they clogged the filter in a rank slimy dark mass and […]